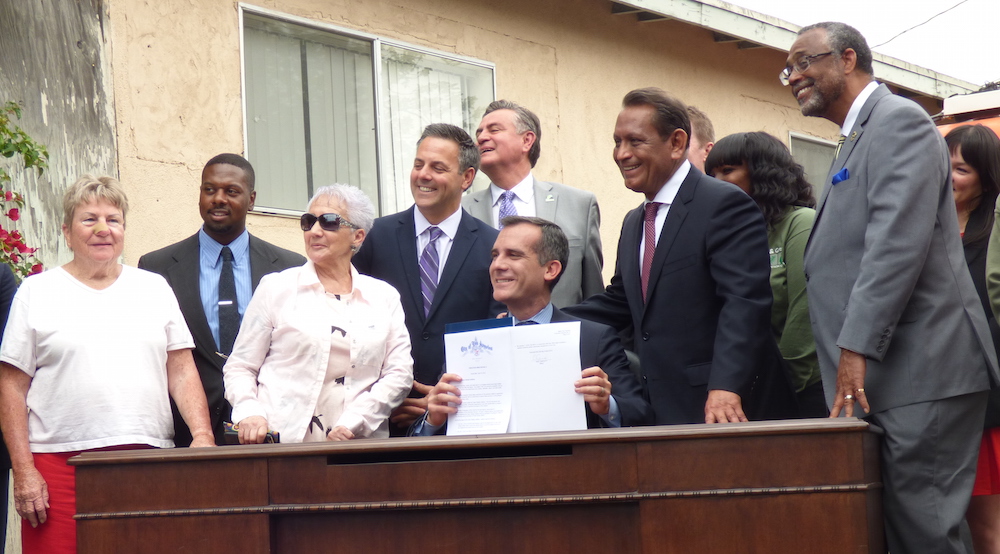 “Everyone who lives here, works here and visits here should be able to walk streets free of litter and debris,” said Mayor Garcetti. “When a child dodges abandoned couches on the way to school, imagine the limits that are placed on her aspirations. This initiative is about cleaning up our streets and keeping them clean. The cleanliness of our streets, sidewalks, alleys and public spaces are essential to our quality of life, our economy and our health, and that’s why we are making it a top priority.”

"When elected I pledged to Clean Up the Streets of L.A., and I intend to honor that pledge for my constituents and for all residents of Los Angeles," said Councilmember Gil Cedillo. "I am proud that my District has stepped up to this challenge and our Keep It Clean pilot is becoming the model for how we pick up trash in the City of Los Angeles. There is no better way to talk trash than with the Mayor of Los Angeles, and more significantly with an Executive Directive - this trash talking will transform the City forever."

"Since taking office, my staff and I have worked tirelessly to remove more than 3,000 tons of trash from our streets and alleys but it still isn’t enough to keep up with the demand. And let me be clear, no one should have to be subjected to living in the filth and blight that some of my communities have suffered," said Councilman Curren Price. "In the City of Angels, we not only can do better – we must. And I believe wholeheartedly that with our Mayor and Council’s strong commitment to this issue and the revolutionary Clean Streets Initiative, we will!"

Councilmember Joe Buscaino added, "To all the criminals out there who think they can continue to trash our neighborhoods - you are on notice. We are coming after you, we will arrest you and will prosecute you to the maximum extent of the law."

"For far too long, abandoned waste has blighted pockets of our great City. We appreciate Mayor Garcetti's bold leadership in tackling this problem head-on," said Director of Sanitation Enrique Zaldivar. "L.A. Sanitation, with its nearly 3000 employees, joins the Mayor and City Council in forging partnerships with our residents to make LA's clean streets the pride of every neighborhood, free of abandoned waste"

Each additional trash can that is deployed takes two tons of trash off the street every year.

The new Clean Street Strike Team is expected to clear 500 tons of trash every month. It will clear large, long-time accumulations of trash to allow for maintenance. Thirteen tons of trash were previously cleared from the alley where Mayor Garcetti signed his executive directive today – allowing for maintenance clean ups like the one that followed today’s press conference. (EDS: the alley is bounded by Venice Blvd., S. Bonnie Brae St., S. Burlington Ave., and the rear of a commercial structure that fronts W. Washington Blvd.)

Mayor Garcetti also urged Angelenos to call 311 to have trash or bulky items like abandoned couches and appliances cleared from sidewalks and alleys. People wishing to discard large items may also call 311 to have them picked-up. The service is free.

To maximize its impact, the Initiative also includes the creation of a Clean Streets Corps – a partnership between the city and Neighborhood Councils, community organizations, businesses and residents to create a cadre of engaged people who will call 311 and report areas that need to be cleaned up.