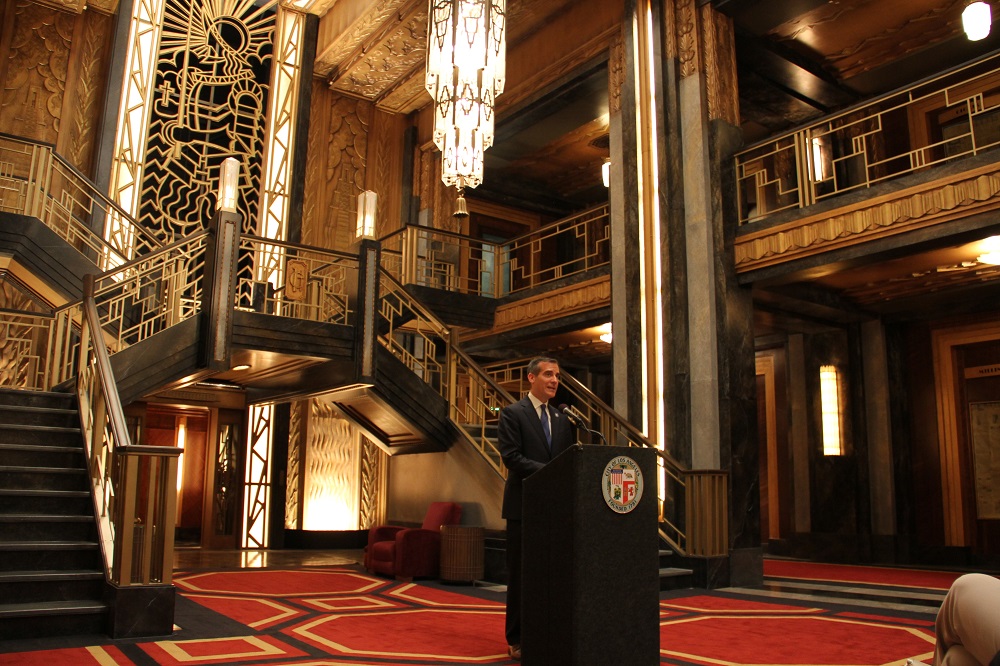 On the set of "American Horror Story: Hotel," Mayor discusses keeping production in L.A. to boost the middle class.

Mayor Eric Garcetti today visited the set of American Horror Story: Hotel to discuss the positive impact on the local economy delivered by the California Film and TV Tax Credit.

"We are fighting back against runaway production, and this tax credit is delivering results for the heart and soul of the film and television industry — the people who swing hammers, run cable and serve food on set so they can pay the bills and contribute to our economy," said Mayor Garcetti. "Our film and television industry is the lifeblood of Los Angeles' middle class, and now production is coming back to where it belongs."

American Horror Story: Hotel is one of 11 projects to receive the first allocation under the new California Film and TV Tax Credit program. Due to the tax credit, production of American Horror Story returned to Los Angeles after filming three seasons out of state. The show is expected to produce $55 million in direct in-state spending, and will pay out $21.5 million in salaries to below-the-line employees.

As reported by FilmLA, American Horror Story is part of a larger trend of film and television production growth in the Los Angeles region. A total of 22 projects have received tax credits in the first two application periods, including Veep, Westworld, and Twin Peaks. Based on data provided with each application, those projects will generate an estimated $1.07 billion in direct in-state spending, including $387 million in wages for below-the-line crew members.

According to FilmLA, "on-location film production in Greater Los Angeles increased 3.8 percent in the third quarter of 2015 to 9,510 Shoot Days (SD). The bump was due primarily to a 54.5 percent quarterly increase in L.A. area scripted television production.

Mayor Garcetti has made protecting and expanding the entertainment industry a priority because it is critical to the strength of Los Angeles' middle class. He has helped lead a statewide coalition of policymakers and business leaders to push for legislation, and created the first-ever Mayor's Office of Motion Picture and Television Production.